Marmon Valley Farm has been serving up farm fresh fun for over 50 years. We thank God in his marvelous grace for using the camp to bring many people to the Savior, our Lord Jesus Christ. Here’s a brief look back at the beginning of it all. 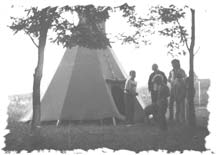 The camp was also home to legendary frontiersmen Simon Kenton at one time. The name Marmon Valley Farm was adopted by the Wiley’s in recognition of the first homesteaders to settle the valley back in 1805. Two of the Marmon homes remain on the property today. The camp itself is actually spread out over three formerly neighboring farms which were gradually acquired over time. The Louden farm, now the stable area of the camp, was the first property attained. Bill Wiley’s dream in 1964 was to open a farm camp for children where they could experience "real" farm life for a week. The early years emphasized farming, gardening, and small animal care. However, it didn’t take long for the horse program to take off after being introduced on a much smaller scale than you see today. 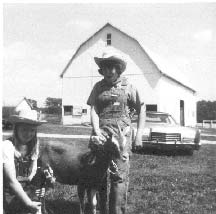 Uncle Bill, as he would become known, began the camp and retreat facility by opening their house to guests. The summer staff of 1964 consisted of 4 staff members. As word about Marmon Valley spread and the Wileys worked hard to pull it off, the number of guests increased, as did the need to expand both the camp and the riding stable.

In 1970 the camp acquired the Thompson farm, which allowed for more riding trails and sleeping quarters, hay storage, and a dining hall. The mid seventies also brought about new goals for Marmon Valley Farm as Uncle Bill and Aunt Phyllis decided to develop a stronger Christian emphasis in the camping program by presenting the gospel of grace through Jesus Christ to all campers who attended. Proclaiming the gospel and encouraging young people to walk in a Christ-like manner remain central to our purpose to this day. 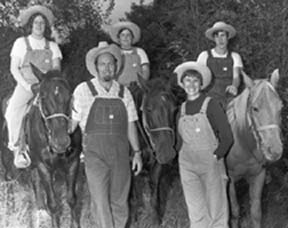 As the Lord blessed, the camp grew in size and attendance. An all-purpose activity barn was constructed in the late seventies, as well as new housing facilities for campers and guests. In the early years, many campers lodged in tents or hay lofts around camp, a trend that was replaced by bunkhouse style cabins. Another land purchase brought the farm’s total acreage to its current size of 450 acres. During the mid 1980’s directorship was handed down to Uncle Bill’s son "Wrangler" Matt. Matt and Kathy along with their 5 children and a committed staff have carried on the rich heritage of family farm fun started by Uncle Bill and Aunt Phyllis.

In the early nineties a historic log cabin was hauled to the camp and reconstructed, to be used as guest lodging, and a giant size covered wagon was constructed for groups to lodge in as well.

The later part of the nineties brought the loss of three farm friends and volunteers and the introduction of two memorial projects: The Butler Memorial Play Barn in memory of Jeff Butler and The Picnic Shelter, a project constructed in memory of Cal Cole and "Wild" Bill Smith. The program and facilities continue growing and developing as we add to and refine many areas of operation. In 2001 a 250’ x 150’ indoor arena was constructed allowing for year ‘round riding lessons, rainy day alternatives and horse show events. 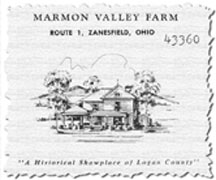 Aside from camp we offer a large year round riding stable with 150 horses and ponies for rental and a retreat facility. The grounds are open to the public for picnics and playing. Marmon Valley Farm also provides school field trip programs that allows for unique farm experiences.

Thanks to God’s faithfulness and the patronage of our guests, Marmon Valley Farm has been operating as a summer camp and retreat center for over 50 years now. Thank you!